Today we submit our final project boards to NPS and the Van Alen, marking the end of our studio process. But the conversation has just started and you can join it now by visiting our website and providing feedback on our work.

Review selections from our research, our final boards, and a summary of our approach to planning and design in the national parks.

Thank you to all who have helped along the way!
Posted by david smolker at 11:47 AM 1 comment:

In his much-lauded history, Native Seattle, Coll Thrush explores the concept of “place-stories,” describing how our understanding of a place is inextricably linked to the stories we hold in our imagination (4). In the case of Seattle, Thrush charges us to re-write the traditional Euro-American mythology of the city—one that has forged its identity from a Native American heritage that it has systematically ignored as a vital player in its ongoing urban development. The new place-story, in Thrush’s vision, is one in which Seattle’s

many Native pasts . . . can be unearthed. These place-stories . . . will be dialogues about the transformations of landscape and power in the city and about strategies for living together humanely in this place. Bringing new stories to light and considering how those stories can inform new kinds of action should be our agenda for the future, and it is crafted in the moments when we simply ask each other, What happened here? (207) 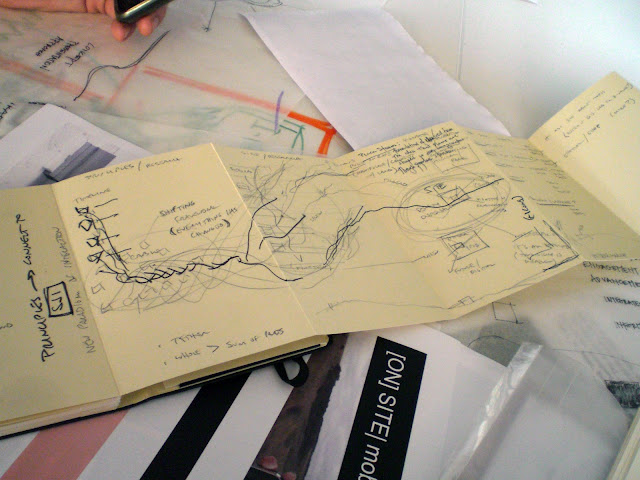 Thrush’s words resonate with our design team, absorbed—as we’ve been—in a re-writing project of our own.  As we begin to call our design proposals “place-stories,” in homage to Thrush, we must consider what they might mean within the context of the National Park Service as a whole. The NPS has a mythic, timeless hold on the American imagination, one that may not always seem human-scale and might not always invite individual collaboration.

To engage all people in national parks, and in San Juan Island National Historical Park in particular, it is essential to provide a relevant park experience that instills a sense of ownership and belonging on an individual level. We believe this can be achieved when people understand that their interactions with a place are part of a much larger—and ongoing—story of human relationships with the land. This is a story, of course, that should be continuously re-written by the people, changing with time. 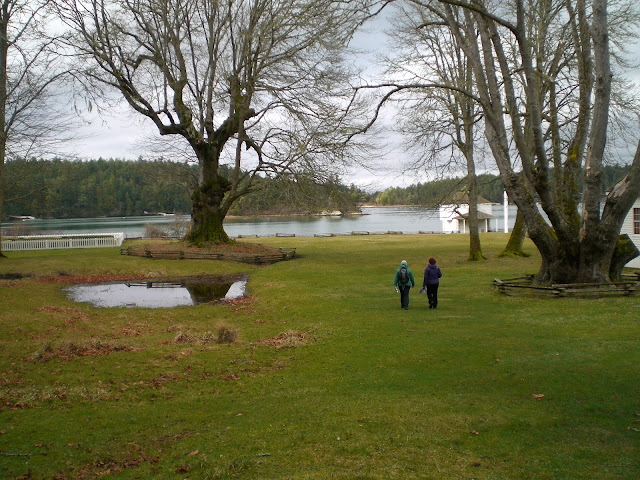 We want visitors to our National Historical Park to not only ask What happened here?,  but also What happens here?

Posted by Betsy Anderson at 11:25 PM No comments:

Last week we discussed the final submission guidelines requiring three presentation board, two written statements and one special item. In preparing mocked up boards, we went through an exercise of prioritizing past ideas (those to keep) and also decided to change the organizing theme from “Common Ground” to “Common Thread.” “Common Thread” will depict the idea of nodes and networks and the interweaving of our concepts between cultural and landscape components of the parks.

Taking this mixing metaphors of “Common Threads” to the three linked boards, the six design principles on the first board can form the needle / threshold which all threads pass through. The second board will focus on the threads, networks and connections that is specific to the island and the site. The concluding board will then showcase our design interventions that can be apply beyond the SJI park and bridging the scales of various parks.

Tasks for the coming week will be going through the course materials produced last quarter and looking for vignettes to weave through our boards. The goal is to have more substantial mock ups for the three boards ready for next weekly discussion.

And this is the last week we have our dearest Carolyn join us for the studio discussion. Carolyn will be on the road working on her new projects. Thank you, Carolyn, for all your great support and prominent inputs. We look forward to sharing our final product with you at the final critique.
Posted by Anonymous at 9:41 AM No comments:

WEEK 16: Portals to the Park

This month we are faced with the BIG TASK of uniting multiple threads of content produced within the studio that ended last month. It brings to mind the immensity of designing for NPS: an enormous agency with an untouchable legacy. One touchstone for us has been the reality that much of the NPS system is comprised of small parks that are pretty firmly embedded in their communities. San Juan Island National Historical Park is familiar, like a favorite aunt, whereas the “Crown Jewel” parks have the arms-length coolness of rock stars. And we are in the lucky position of understanding the complexity of NPS through San Juan Island – an extension of our own backyards here in the Pacific Northwest.

We’ve been framing much of our investigation as one of portals: SJI-NHP is our portal into the NPS system; the park provides a portal to National History through its interpretation of the boundary dispute between the United States and British Canada. The ferry terminal in Anacortes provides an entry point to the San Juan Islands, and pathways within the park create thresholds of ecological understanding. But how do we represent the diverse manifestations of thresholds in a clear, graphic presentation? 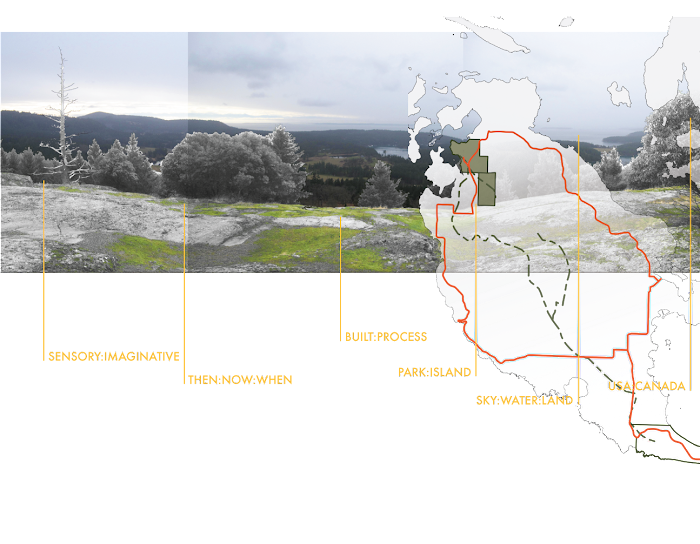 Last week, within the pages of the novel River of Smoke, I found a description of portals that may provide some guidance:


…gateways are not merely entrances and exits – they are tunnels between different dimensions of existence. Here, as at the threshold…I was visited by the feeling that I was stepping into a realm that existed on some plane other than the ordinary.
Amitav Ghosh (2011)

Weeks 12-14 for the "Parks for the People" studio group comprised exam week, Spring break and the first week of classes, so we begin with a recap of Week 15.

We are happy to report we have rested and regrouped. Now, as a group of 12, we comprise 8 students, a Ph.D candidate, and our two professors. We have also the consult of Carolyn Law, a talented Seattle artist, and we have also a lot of work to do. 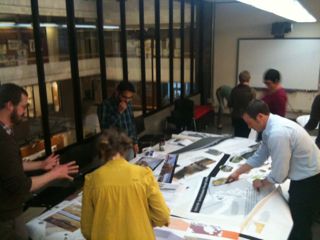 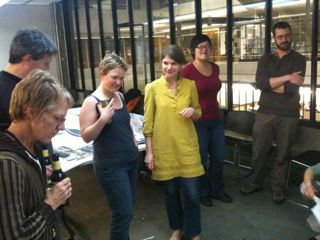 We took this opportunity to assess the work to date, to cull, cut asunder, and collage together our best executed ideas, into a tangle of paper and web of design. We drew strands to NPS design principles, weaved a network together, and then teased the tangle apart.

Armed with scissors, uncompromising critique, and a determination to bring the freshest, strongest ideas forward, we ensured there would be no 'sacred cows' in our final push, and stayed working into the late hours, gripped by the challenge ahead and the catharsis of cutting ties to the past. 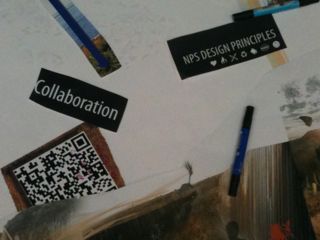 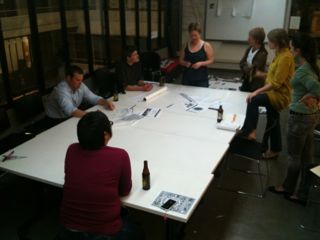 “What are the 'sacred cows' in the National Park System?” we asked.  In challenging these notions, we look to find where true design innovation resides.

As we make the final push, we grapple with this question, looking for the appropriate solutions or interventions to connect the past, the history of the park with its future.

More updates to come, final submission in less than 5 weeks!
Posted by Tyler Sprague at 7:52 PM No comments: 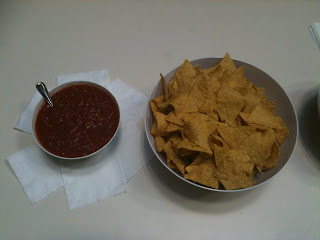 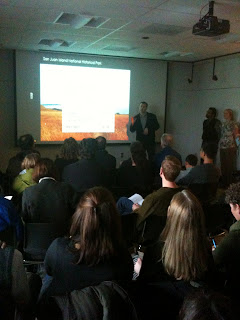 Our presentation began with greetings, acknowledgement of people who offered support, and a review of our team process by our two professors, Ken Yocom and Manish Chalana.

This was followed by a presentation by students of Museum studies, Museology, who gave an overview of the four groups within our student team and the ideas we had brought forward together. The four groups consisted of between three and six students each and represented scales or areas of focus. The Technology Group looked at the use of technology through the journey to the park and at the park; the Island as Park group looked at re-describing the Park’s position; the Site group focused on design on the site and the Structure Group looked at structural form within the site.

The Museology group introduced the team concept of “Common Ground”, an idea that wove through our design interventions and our process of collaboration and integration of community. Four main Narratives were introduced as common within all four groups: the Park’s mandate, ecology, Native American, and local industry. 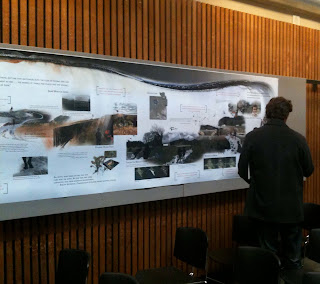 After an introduction to the history and place of our site, San Juan Island National Historical Park, we had a few minutes to talk with our guests over some snacks and refreshments while viewing the striking black and white photography of John Stamets, Professor of Photography, who has spent considerable time on San Juan Island, at our park site. Our group presentations then began in the Gould Hall Atrium, a wonderful expanse of light on the first floor of our four story building that houses the College of Built Environments. 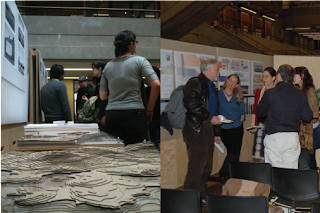 The response by the reviewers was insightful and strong, pointing out the need for more integration among the groups and clarity of the design principles. In the coming weeks a smaller group of student's representing the larger group will pull together those loose threads spotted by the reviewers and channel all our collective efforts into a seamless package. 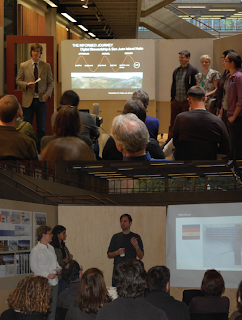 Congratulations everyone for a job well done! Go out and enjoy a well deserved spring break!!